As a child, I dreamt of being a writer, but I thought it was a dream that was out of reach. I worked in a bookshop. I worked in publishing. I worked at the Southbank Centre, organising readings by writers and poets. I then went off to run the Poetry Society and was the first woman in charge since Muriel Spark in 1948. From my mid-twenties, I reviewed fiction, poetry and non-fiction in newspapers and magazines, on top of full-time jobs.

Have you noticed a theme?!

Writing was my passion, but I didn’t think I was allowed to do it, except as a hobby or a side-line. Just after my 39th birthday, I left the Poetry Society to become a full-time journalist. I felt as if I’d won the lottery – and, in a way, I had.

I was at the Independent for 10 years, first as deputy literary editor and then as one of the lead interviewers and columnists. During that time, I interviewed writers, artists, poets, rock stars, comedians, film directors, actors, musicians and politicians. 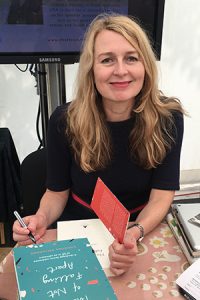 My dramatic departure from The Independent was the spur for me to write my book The Art of Not Falling Apart. It was picked as a book of the year in the New Statesman and the Mail on Sunday, which described it as “a manual on how to survive in the 21st century”. The book is a mix of memoir and interviews about how we cope when life goes wrong.

My next book, Outside, the Sky is Blue: a family memoir will be published by Tinder Press in 2022. I wrote it during the pandemic, and it’s the book (or a version of it) I’ve wanted to write all my life. It has been hailed by The Bookseller as “a wonderful, heart-buffeting family memoir” and picked as their non-fiction Book of the Month. You can read The Bookseller‘s interview with me here.

I now have a portfolio life. I’m a critic for The Sunday Times. I’m a regular guest on Sky News and the Jeremy Vine Show. I’ve written for the Guardian, The Observer, The Daily Mail, The Times, The Telegraph, The Spectator, The New Statesman and a range of glossy magazines. I’ve been to Ethiopia to interview coffee farmers, to Jordan to interview Syrian refugees and to Sicily to interview trafficked sex workers and nuns.

You can read more about my work, and my writing, here.

I’ve been a chief exec and a non-exec (in the arts, housing and charity sectors). I’m an Orwell Fellow, a Fellow of the RSA and an ambassador for Women on Boards. I’ve enjoyed most of the things I’ve done, but I’ve learnt that what makes me happiest is writing and speaking in my own true voice.

I’ve trained as a coach because I want to help other people experience the joy of doing what they love, and doing it well.